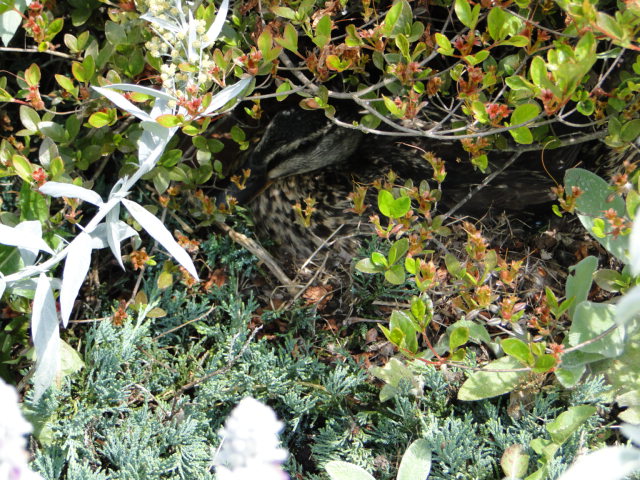 A couple of nights ago, our doorbell rang. When I answered it a young boy, around ten years old, stood on the front porch hopping from one foot to the other. His dad stood behind him.

“My dog came into your yard and found duck eggs in the bushes out there,” he said pointing to the area behind our mailbox. “Come see.”

I followed him outside and sure enough, there were ten eggs in the bush, but no adult ducks anywhere around.

“I told the lady at the farm we had ducks laying eggs in our yard,” the father said. “She told me to smash the eggs and shoot the duck.”

I guess she’s tired of the way her ducks have multiplied, but we don’t see it that way. Sure, they’re an annoyance when they decide to do their duty on the patio. And yes, it’s no good when they decide to lie down in the onion beds. But we can’t kill them. We can scare them away; we can make it uncomfortable for them to stay around here, but in actuality we’ve had fun watching them. And we do live in a rural area – we moved into wildlife territory.

This morning I went to check on the eggs, and the female had returned to the nest. I read that the male mallard doesn’t hang around after the eggs are laid. The other day, I drove past the farm where the ducks originated, and six adult male mallards walked in front of my car. Probably on their way to the golf course while the females stayed home to rule the roost.

We also have a robin nest on our patio ceiling. Every year this poor robin builds a nest there. We’ve tried discouraging it by putting up cardboard pieces, but this year we gave in. This morning I spied a baby peeking up over the nest while the mother went in search for worms. 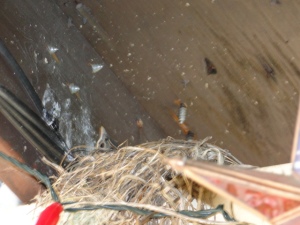 Nature is in her glory this time of year, and who are we to fight it? What’s going on with the wildlife at your place? Any suggestions on keeping the ducks from pooping on the patio?

2 thoughts on “The Saga of the Mallards Continues”