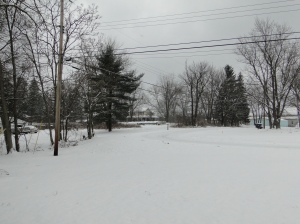 I woke to a fairyland of snow-covered trees and lawn on a day when I thought I would be waking up to the marsh and swampland of the Everglades.

I’d planned a writer’s retreat while my husband attended a conference in Reno. We began by spending a week with my daughter and her boyfriend in St. Augustine, after driving there from Pennsylvania the week before Thanksgiving. We played in the surf, walked the beach, walked across the Vilano Bridge to Ponce de Leon’s Fountain of Youth site. And then we shared a Thanksgiving dinner with family and friends in Flagler College’s dining hall, replete with one of the largest collections of Tiffany glass in the world. The college is housed in the former Ponce de Leon Hotel, Henry Flagler’s showpiece of grand architecture, art, and opulence during the Gilded Age. My daughter graduated from Flagler in 2005, so it was a grand setting with a bit of nostalgia. The food was tasty and the company even better.

As our week progressed, the weather warmed. But my husband’s condition that first surfaced in Mexico returned, and we were forced to cancel our plans and come home five days earlier than planned.

As I looked out at the snow-covered yard, I was struck by the beauty of the whiteness against the stark background of naked tree limbs.

We spent those unexpected days at home with no plans or deadlines and delved into keeping warm and getting my husband well.

In the week since we returned, I’ve completed the first third of my new novel, Native Lands. It might be true what writer Harry Crews always said. He needed to write about growing up in Georgia away from there.

Perhaps being in the setting of the Everglades would have distracted me from the work. As the wood storks, great blue herons, and snowy egrets foraged for food in the swamp, my eyes would be glued to them and not to the laptop screen. The gators sunning on the edge of the water and fish slowly swimming by the dock would have occupied my time instead of the writing. The kingfishers, pelicans, and ibis might have forced me to photograph them rather than working on my manuscript. 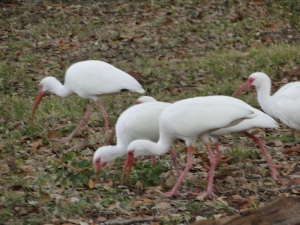 The warmth of a November day in the Everglades would make me sit with my feet up, a beer in my hand on a lounge chair overlooking the mangrove and cypress trees dripping in Spanish moss. It’s much easier to write when I’m forced to stay inside.

I’ll go back, hopefully in February, for another try. This time I’ll have more of my novel done and during  my time in St. Augustine and Everglades City, I’ll spend time on plenty of porches and sandy beaches warming my toes in the sun checking my facts on whether the surf is stronger at sunrise or sunset and determine whether the pelican or the great blue heron fascinate me more on a lazy afternoon.

That’s good research in any book I write. 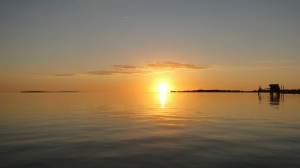