I wrote From Seed to Table in 2013 while we lived in southwestern Pennsylvania. In 2015, we bought a cabin for summers in the Smoky Mountains of southwestern North Carolina, while returning to my north Florida home in north Florida. Since then, my husband has been learning to garden in two different zones, and I’ve expanded my repertoire for cooking and preserving the food grown during year round gardening experiences.

While self-quarantining during the COVID-19 pandemic, I decided the time had come to work on revising the book. I’d been adding to a file but had put off revisions while I worked on other projects. The time seemed right to work on the revisions. There appears to be a renewed, and in some cases, new interest in planting gardens. It is my sincere hope that From Seed to Table will inspire others to grow their own food while giving plenty of tips to make the process fun and successful.

Happy spring and gardening to you and yours!

From Seed to Table – Growing, Harvesting, Cooking, and Preserving Food

“This is a friendly book that makes you feel like you are just sitting and having a chat with a knowledgeable modern day homesteader. P.C. Zick has adapted a sustainable lifestyle with gardening and preserving in different climates, (Pennsylvania to North Carolina mountains to north Florida) and urban to acreage. She shares her perspective in a manner that will benefit interested readers in varying locations. There are tips in there for the novice and the more experienced.” – Dr. Jennifer Shambrook, Author

From Seed to Table offers the personal experiences of home gardening from one couple. Starting with winter, the book follows each season from the garden to the table. Gardening tips, as used by Robert and Patricia Zick in their vegetable gardens in three different zones, are given along with preserving tips and recipes. The book also includes suggestions and recipes for canning and freezing vegetables. The Zicks hope some of their experience will inspire others to grow their own food and to eat local food as much as possible. While not an exhaustive reference for all gardening, preserving, and cooking techniques, it is filled with firsthand experience from an experienced gardener and a veteran cook.

The garden started in March by building raised beds on the side of a hill are still producing! Tomatoes, winter squash, and lima beans grace our table. Although the butternut and Queensland Blue are there more for decoration right now. 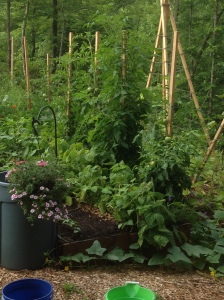 Next on the agenda:  The Florida garden. We’re in the process of heading to our home in Tallahassee for the winter. It will be the first time my husband has spent the winter away from a northern climate. He’s already plodding and planning and ordering seeds. In fact, yesterday, he began potting some seedlings. He hasn’t even built the garden yet! But he plans on using the same concept of raised beds and creating his own mixture of soil.

How did your garden grow this year? Love to hear from you!

It’s been a long winter, which makes us all the more appreciative of all the signs of spring. These daffodils came out last week, and then were beaten down by a ferocious rainstorm within the first day of blooming. But with a little sun and some warmer temps, they rebounded in a yellow bursts of hope.

peas reach for the sky

The peas are growing steadily. The other plantings are also starting to show themselves, while others wait for their time in the soil. 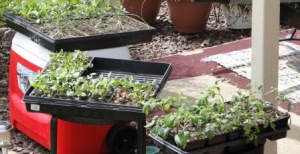 A Note on Raised-bed Gardening

Excerpt From Seed to Table (to be released in May 2013)

Robert has been gardening using the raised bed method for several decades. I’ve come to appreciate its benefits as well. He rakes the soil into eight-inch mounds in three- to four-foot wide rows. He forms the raised bed from soil raked into a mound. The space left forms the paths between the raised beds and is an excellent place for mulch application.

The mulch we place on the garden serves as its own compost bin. We use straw from a local farm – we buy six-eight bales total in summer and fall. They cost approximately $6 each. I use them as decorative items in the yard until Robert’s ready to pull them apart for use as mulch. We also use mushroom manure, grass clippings from our lawn, leaves from our trees, compost from the bin, plants that have bolted, remains of vegetables, such as cornhusks, pea pods, or bean ends and strings. This material goes into the valleys between the raised beds to form a path between rows. It’s very easy to reach all the plants in our garden from the mulched paths without walking on the beds.

When we first married, I was cautious about going into Robert’s sanctuary because I didn’t want to do something wrong or step on anything. After the first year of working with him in the garden, I realized his way of laying out the garden made it extremely friendly for me to go out and pick vegetables. Also with the heavy layers of mulch between the rows, there’s very little weeding to do in the garden.

Raised bed gardening provides several benefits over regular garden beds. Because the plants are above the ground, drainage from the beds is very good. It also helps in aeration of the soil and the plant’s roots. It increases the depth of the bed. And my personal favorite, it provides excellent demarcation of the plants and the walking paths.