The spinach is almost done before it started this year. We had such a short window of opportunity for spring that the spinach bolted very quickly. I’ve already frozen nine bags and we’ve eaten several meals from this year’s crop. We probably have another ten to twelve bags to freeze. 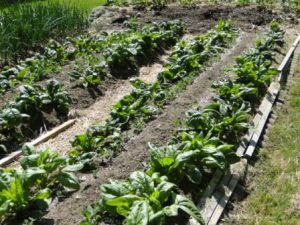 I told a friend I froze spinach, and she wondered what I did with frozen spinach. We eat it! We heat briefly in the microwave and serve as a side dish. We use it in recipes such as Greek pizza and lasagne – both recipes are included in my new book From Seed to Table. 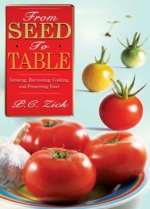 I outlined the steps in From Seed to Table for freezing spinach starting with blanching it first. If you’d like to have the rest of the book on your Kindle, I’m offering the book for free on June 13 and 14. The regular price is $2.99. Here’s an excerpt on preparing spinach to freeze.

Note: the blanching steps may be followed for most vegetables with variation in the time the vegetable is in the boiling water. The recipe below preserves as much of the vitamins and taste as possible. Our frozen spinach is green and tastes “almost” like we’d just picked it.

One colander full equals two servings and fits perfectly into a freezer sandwich bag. It’s fine if some water is in the bag – it’s probably better for the spinach.