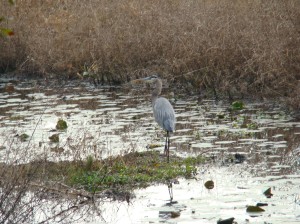 great blue heron in the salt marshes of Florida

My grandmother taught me a love of birds many years ago back in Michigan. She had a bird feeder right outside the window so she could see it from her chair in the living room. She kept bird books on the table there and I loved to visit her in the winter to watch the colorful birds come to the white-covered feeder.

When I moved to Florida, I continued my love affair. I’m not an expert, but I know I admire birds, especially large ones. The great blue heron is found near any type of water, but I thought it was only in Florida. When I moved to Pennsylvania two years ago, I discovered they are year-round residents here as well. One morning when I woke in my new house, I looked outside the French doors in my bedroom to the balcony railing. A great blue was perched there looking down at the small pond below as small gold fish swam unaware of the danger lurking above. Too bad my camera was in another room.

Great blues forage alone so it was with surprise that I saw two flying over us as we cruised on the Beaver River recently. I assumed they must be migratory here, but according to the Cornell Lab of Ornithology, they are year-round residents in much of the continental United States. 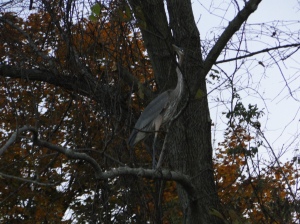 Right now, the males are searching for places to nest in the trees, which provides an explanation of why these two kept perching on tree limbs instead of the usual foraging on the banks of the river. It also explains why these two traveled as a pair. Most likely, the male is looking for the right platform while enticing the female to join him.

We also saw a great egret on the river the same day.

I’d never seen one of those in Pennsylvania, but they are abundant in Florida. These are migratory birds, but usually travel in flocks so I’m not sure why this one was alone. According to Cornell, during mild winters the great egret will remain in the north. We did have a mild winter last year. In that case, the male may have been doing the same thing as the great blue: looking for a nesting site in the tree. Then again, this great egret may have just been resting for a bit before heading to its winter home in the south. No matter the reason, it’s good to see the great egret here. At one time, they almost disappeared because women’s fashion required their plumes in gilded age hats of the late nineteenth century.

This time of year anywhere in the world, is a great time to see the birds preparing for the change in season.

8 thoughts on “A Love Affair with Birds”